We decided to “Opt Outside” for Black Friday during our trip to Medellin for a daytrip to El Peñon near Guatape. La roca (as it’s also called) is disputed between two towns, El Peñol and Guatape. Two hours by bus, you can get dropped off along the road maybe a half mile or so from the actual entry point to the park. Most hike it, but there are a couple guys who will (for a small price) tuk-tuk you most the way. We opted to tuk it. Why not? 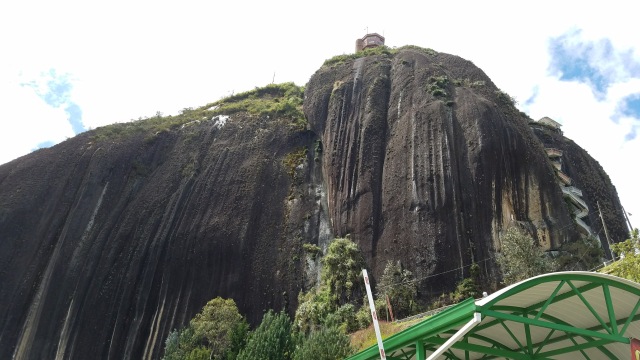 Also “phew” as while 740 steps isn’t too terrible, I suppose, your starting point isn’t exactly sea level. The top is at just over 7,000ft (2,130+ meters) … so there was some huffing and puffing going on. And not only from me.

The view at the summit is incredible and is a full 360 degrees.

After taking in some ice cream and a pineapple juice from vendors at the top (passed on a cerveza… needed my legs for the walk down), we took in the view for a good while before descending. Descending was actually more harrowing than the climb. Slow people and steps that extended maybe 70% of my size 11’s  had me duck walking down and rendered my legs jello by the time we got to the bottom. Fortunately our tuk-tuk guy was waiting at the base of the rock and for 15,000 pesos ($5) would drive us all the way to Guatape, which is still a couple KM from the rock.

Along the way in “The Limozeen of Tuk-tuks” (his term, though I altered spelling of Limo in homage to Strongbad) he slowed for a couple houses on the way to “Guatapulco” (his term, again, he’s gots the wordplay, mixing tourist magnet Guatape with Acapulco) to show the paneled artwork along the bases of the houses, showcasing pictures of Llamas, the Rock, flowers.  He explained this wasn’t a thing to attract tourists, but a practice that dates back a couple hundred years and even houses that were a ways away from the restaurants, etc, were still done up.

After he dropped us off in town, we decided to skip on walking around to take in the picturesque place to gobble down some well-earned lunch, not to mention a well-earned cerveza. Fortuitous. Partway through our meal it started dumping down rain. Just as we finished a feast for a king, consisting of grilled trout with (a LOT) of cheese, ajiaco soup for her and bandeja paisa for me, it cleared up giving us perfect weather for a stroll through town.

After walking up and down the streets, enjoying the vibe, colors and feel, it started to rain again. Fortunately we were able to trade in our bus tickets for an earlier ride and returned back to Medellin.

Notes for travelers who are going to Medellin, want to visit Guatape and somehow stumbled across this blog:

– Getting there from Medellin isn’t terribly difficult. Or expensive. Take a cab to the north bus terminal, from there ask someone at the info kiosk. “Guatape?” and they will point you to the correct kiosk (there are something like 30 to 40 of ’em) to get your bus tickets. The tickets themselves are pretty cheap. Like almost shockingly so. Maybe $7 each, one way?

– The rock sits between two towns, and is a couple KM outside (BEFORE) Guatape. The bus will stop there, our driver simply announced “La Roca!” and all us gringo tourists got off. You don’t need to go all the way to Guatape only to have to double back to the rock.

– You can also buy your tix to return to Medellin at this drop off spot. Hooray, convenience. I think the last returning bus is something like 6pm. Maybe 6:30pm. Though, as noted, we had no trouble exchanging ours in town for an earlier return.

– Our entire foray took maybe four hours or so, from the time the bus dropped us off at the tuk tuk guys until we boarded a bus back to Medellin. Was ample time to climb the rock, take it in, take pictures, take more pictures, enjoy our ice cream, take it in once again, along with a few more pics, head into town, enjoy a leisurely one hour lunch or so, and stroll through the majority of the town. If the day is clearer, you can spend more time if you’d like to get on board one of the boats that offer lake tours.

Frankly, my Spanish is terribad and hers terriworse. We stumbled through this without any more detail than the above, and believe we spent maybe 100,000 pesos or so (about $35), in all for transportation. That includes the cabs to get us from the Poblado area of Medellin to the North bus terminal, busing back and forth, both tuk-tuk trips and the return taxi from the bus terminal to our apartment. And even then, probably a full 10,000 pesos of that was “rent” for our cab, you know, the meterbleed when the cab sits inert in traffic.  So swerve the $80+ tours you find online, the additional money is better spent on ice cream on top of the rock and a nice bandeja paisa and cold cerveza for lunch.

i am from arizona, lived three years in asuncion and now reside in bogota. i am married. have a limited budget, but like to travel. i also like beer. and food.
View all posts by perducci →
This entry was posted in Travels and tagged El Peñon, Guatape. Bookmark the permalink.