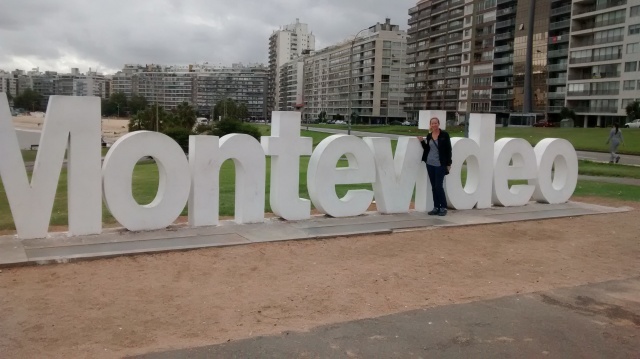 In case the title and lead in pic didn’t give it away, we spent Fall Break/Easter Week/Semana Santa this year in Montevideo, Uruguay. Gave us a chance to check out the city, visit another country, try their take on the lomito (a chivito) and get horribly baffled by the local variation of the language. (Uruguayan Spanish seemed like the equivalent of, say Polish to Russian… lots of shshshsh’s, almost like a “slurred” version. I had a hard time keeping up.)

Weird week to visit. While BA and Mendoza still were bustling last Semana Santa, in Montevideo everyone heads to the resort area, Ponte del Este and the break is referred to as Semana Turistica. Was weird to see more and more shops and businesses close up as the week went on.

Katie had a week off, whereas I didn’t. It was cloudy and cold-ish when we arrived. (60F). Monday through Thursday the weather was absolutely glorious, as you can see from the pics of our Wednesday late afternoon trip to the Bodega Bouza, a nearby vineyard. By Good Friday and time to check out the Mercado Puerto it was grey again, and Saturday tacked some rain on. Not complaining, though, as the colder weather was a welcome change from sweltering Asuncion.

Our airBNB apartment was, uh, snug, but located mighty close to La Rambla, the walk/biking pathway that follows the edge of the city along the Rio Plate. We enjoyed walking it a couple KM in either direction and Katie enjoyed the playa during the sunnier days while I worked away. 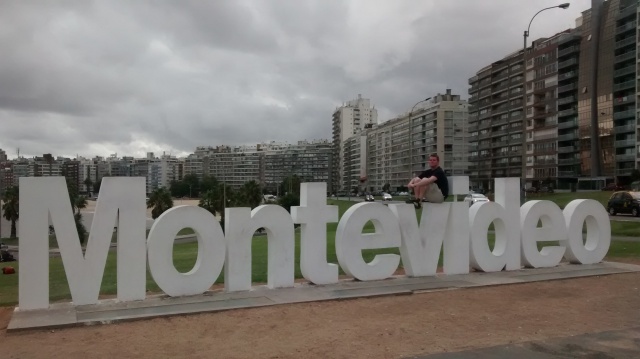 The city itself was, as we were lead to believe, fairly expensive. Simple items – the boring crackers we buy here for about 80 cents a package were going for just over $3. A chivito, which is a slightly more dressed up lomito goes for about $10, whereas I can get a lomito and a beer, with tip, for about $5 in Asuncion. 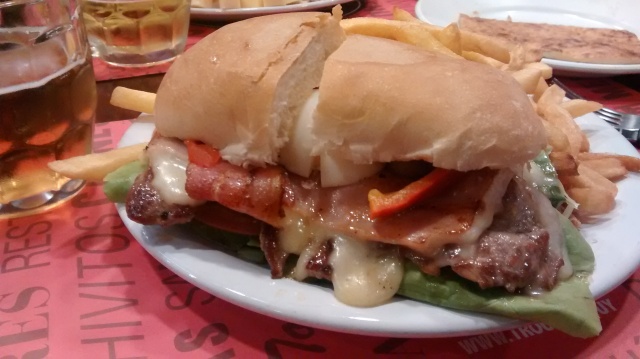 Beef, on the other hand, wasn’t terribly expensive, as I recall. And, as you might expect in a South American country with more cows than people, mighty good. 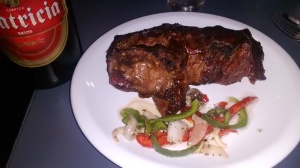 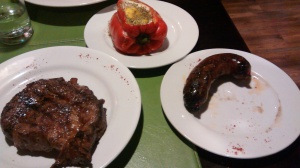 Places were closing down as the week progressed. The cool, historic but slightly divey Tranquilo Bar was open Monday & Tuesday, then shuttered the rest of the week as were all the nearby cambios and some cafes. Had bad luck with Mastra & Montevideo Brew House being closed earlier in the week, but fortunately were open later and enjoyed some decent beers, though I must confess the two bottles I took home from MBH topped any of the draft beers I tried.

Exploration was limited to just our barrio/the Rambla, as noted above. We also took a Bodega tour (Bodegas in some parts down here are not small markets, but rather the actual wineries.) The weather was glorious as were the grounds. Bodega Bouza, in addition to a swell restaurant, also houses a museum/show room of some very old cars and motorcycles the family has collected. Really impressive.

After checking out his olde tyme vehicles we were given a brief tour of the grounds and the winery works. Now kind of familiar to us. We ended with a tasting at the restaurant, paired with cheese and meats. Really enjoyable combinations. Most of their wine is exported, with a majority of the remainder consumed there at the restaurant. 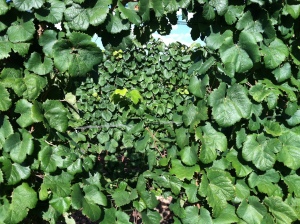 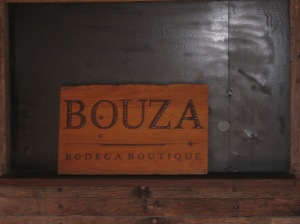 Friday we checked out the old city, starting with a walk around and lunch at the cool Mercado Puerto. Stuff to buy on the outside, and an old, open structure with pretty much every square inch devoted to asado restaurants, showing their wares and trying to attract the tourists. We opted for a more expensive place simply for the rooftop dining option, so we could look down at the market.  Was a “tourist” place, definitely. The meal was good, but we got better food for less at other restaurants. Still enjoyed the experience and spectacle. 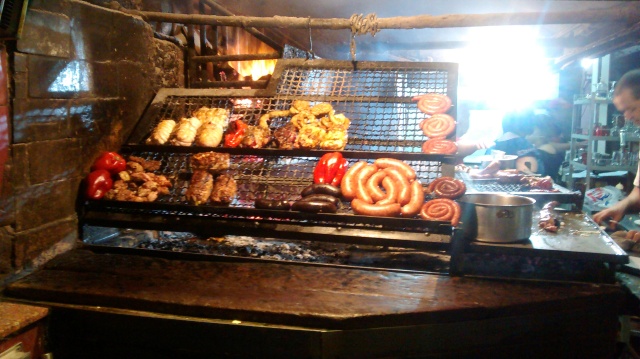 Continued our walk through the Old City, checking out some landmarks, statues, parks, and the particularly stunning Palacio Salvo, as well as a partial look around Teatro Soliz.

Saturday’s less than stellar weather kept us from doing much aside from relaxing in our apartment before we had to get up far too early to fly home. Was a fun trip. Our neighborhood in Montevideo, despite being increasingly deserted as the week went on had a lot of charm, cool places to eat, a couple craft beer joints and friendly people.

i am from arizona, lived three years in asuncion and now reside in bogota. i am married. have a limited budget, but like to travel. i also like beer. and food.
View all posts by perducci →
This entry was posted in Travels and tagged Montevideo, Uruguay. Bookmark the permalink.